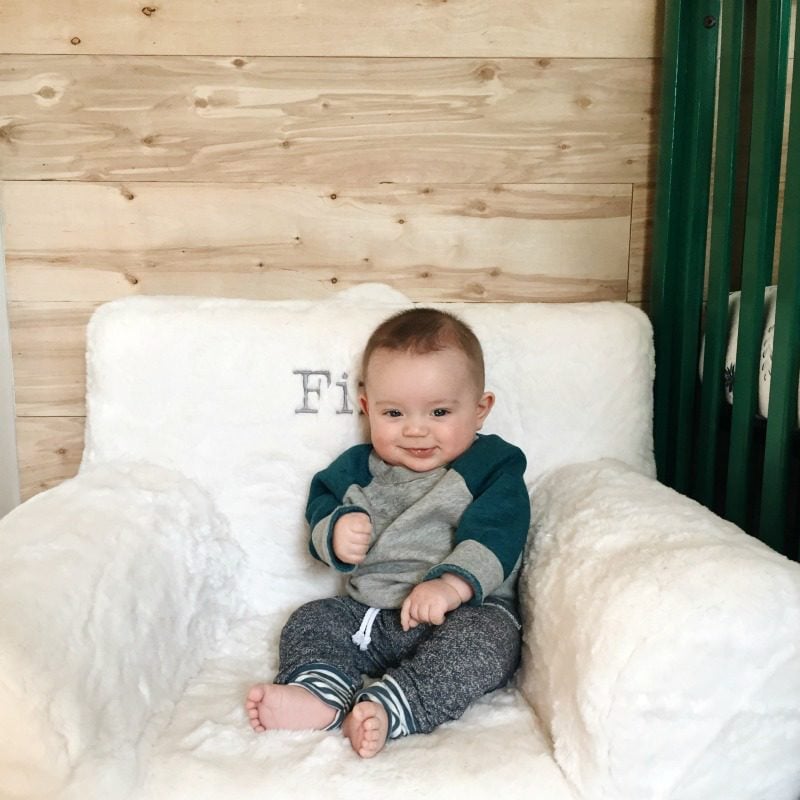 All of a sudden my tiny newborn is a 5 month old tank of a baby and I refuse to discuss how that is almost six months which is basically almost a 1st birthday, otherwise I’ll probably cry over it.

Okay, baby Finn. He’s basically the greatest baby of all the babies. Snuggly and sweet, but loves his bed and his milk and his family. He’s just the best. 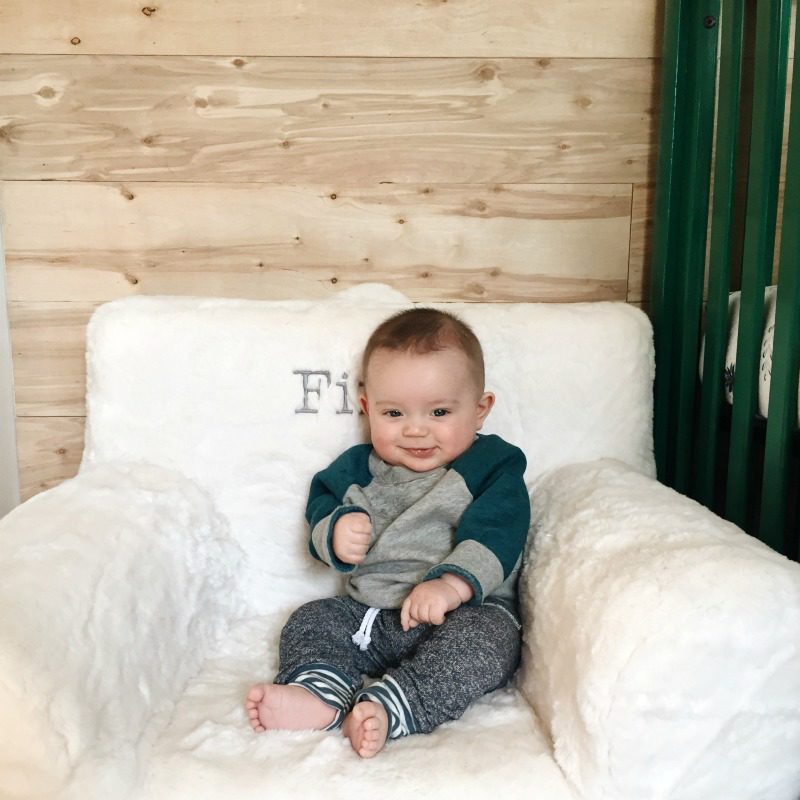 We had to switch out of Up & Up diapers(due to explosion issues. My Mom called them Up & Out diapers instead, lol) so we changed to Huggies Little Movers and they seem to be…containing well. 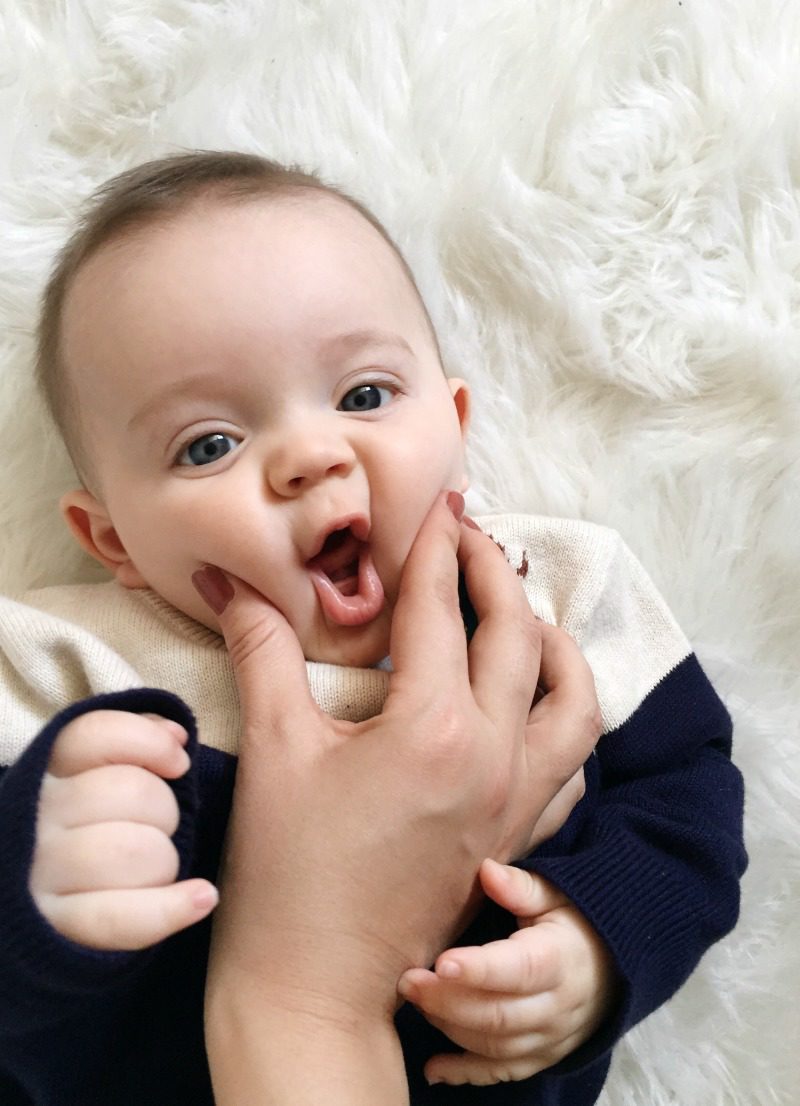 Breastfeeding: He nurses every 2-3 hours during the day and about every 3-4 during the night. He always nurses on both sides for about 3-5 minutes each. And he clearly knows what he is doing because, rollllllls. No plans to start solids anytime soon, he is still doing wonderfully well with just his milk! And no bottles either. He goes everywhere with me or I stay with him(which is my choice and 100% what I want!) Breastfeeding makes me really happy, so this is a season of my life that I’m happy to really just focus and do that. 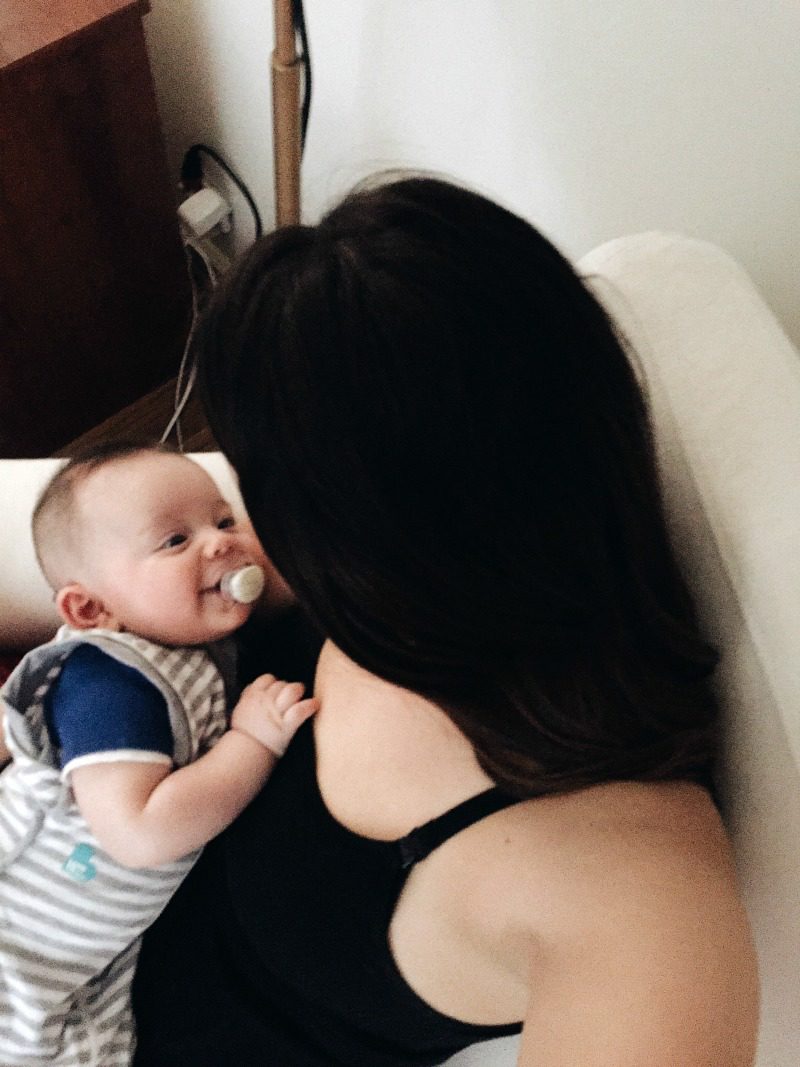 Sleep: So, sleep. Month four was a rough one but I feel like we’ve come out on the other side?? He started trying to roll over so I didn’t feel comfortable leaving him in his SnuggleMe and swaddle anymore(which was so, so sad because he was doing amazing in it) We had a few super rough weeks of sleep there as he learned to sleep flat on his back with his arms free in his crib, but eventually he got back to sleeping how he had been!

He naps 3 or 4 times during the day, after having been up for an hour(sometimes a little longer) I lay him down with his paci, swaddle, white noise machine, click on the seahorse, and leave his room. Out he goes! I try to get him to sleep until his next feeding- so that’s typically 1.5 to 2 hours.

At night, he goes to bed between 7-8 and gives me his longest stretch at this point. He usually wakes somewhere between 11-12 and then after that he eats every 3-4 hours until we start our day at 7:30! 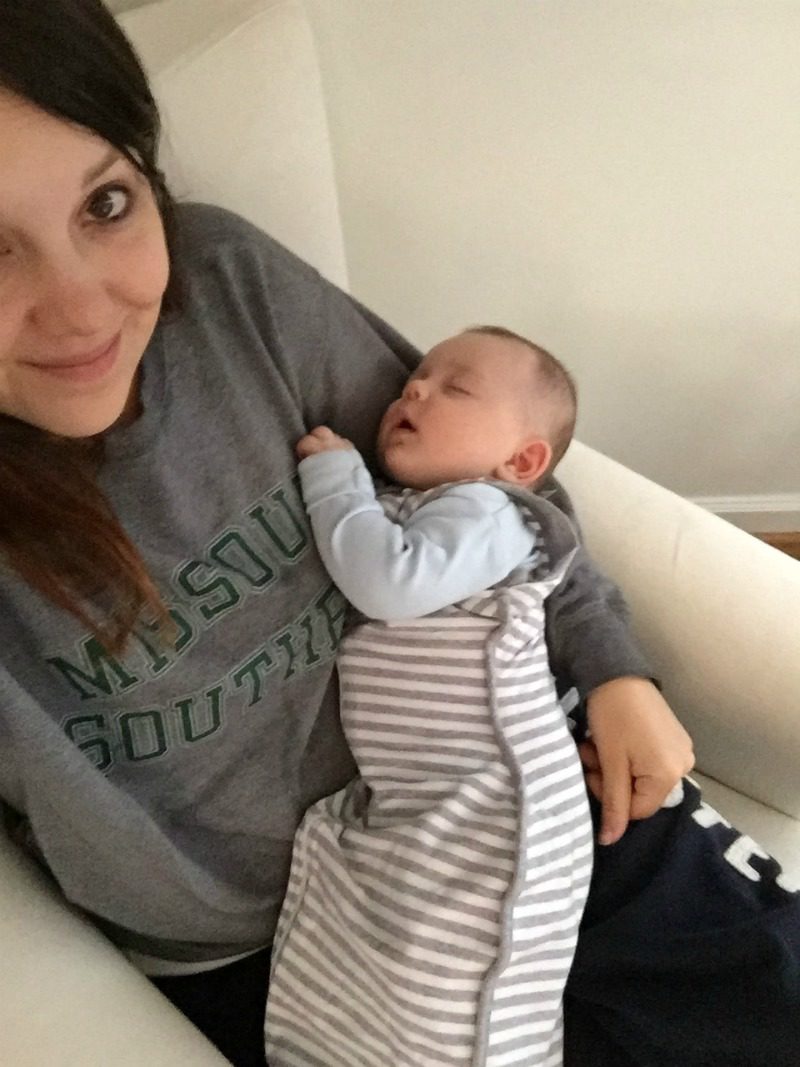 Loves: He loves so much! Patty cake, his bed, his family, his activity center, bath time, his baby gym, nursing(of course!) 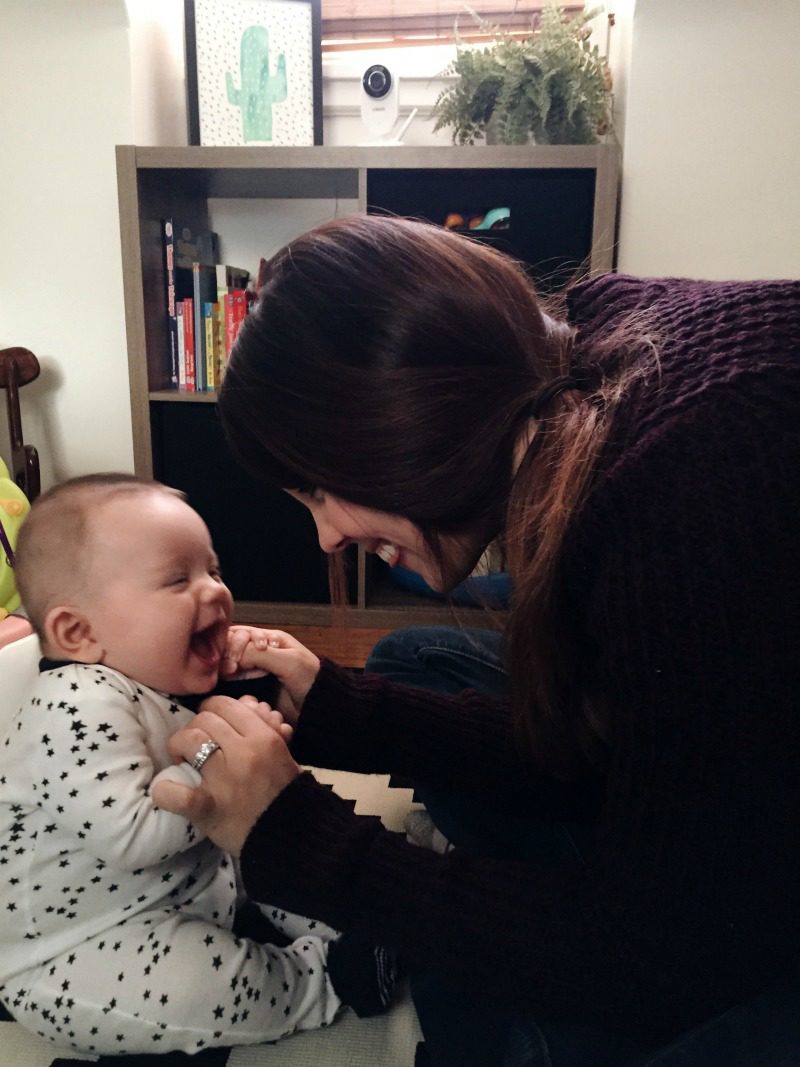 Hates: Being strapped into his car seat, the bumbo, and waiting five seconds to keep eating between sides. Like, he’ll arch his back and yell at me EVERY TIME which makes it take even longer because I have to be like, dude. it’s right there, take a chill pill, little man! 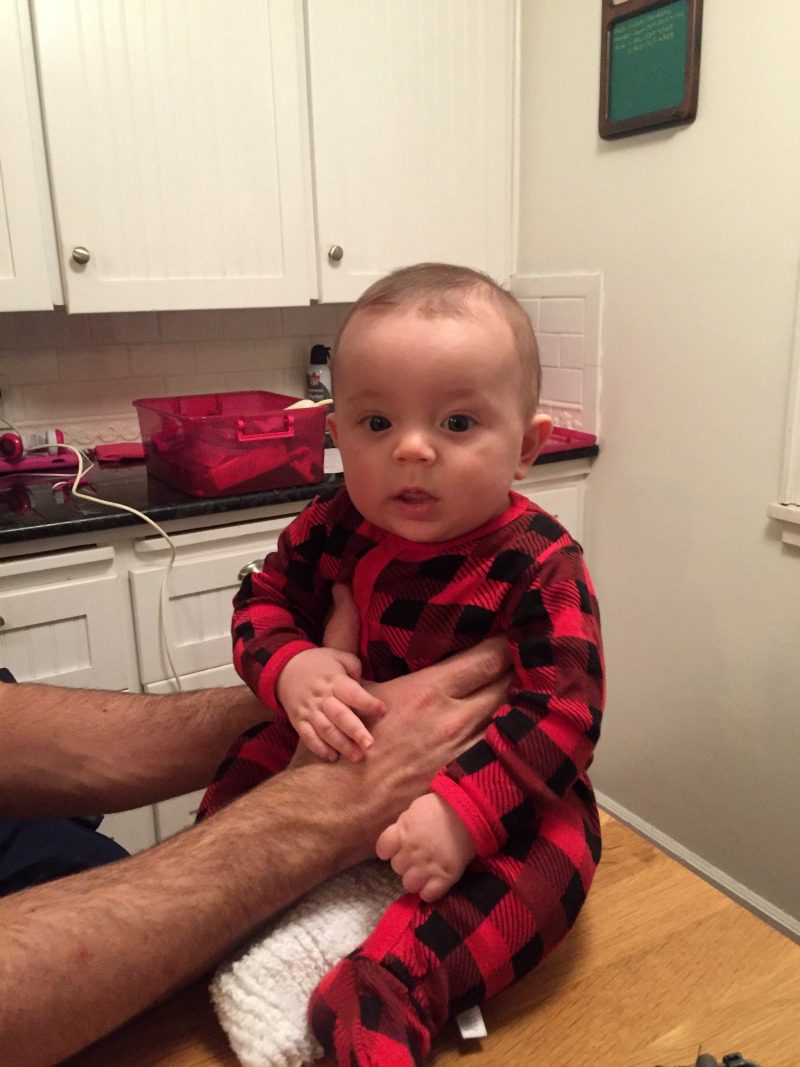 Places He Has Been: I think the only new place he visited this month was Urgent Care for a persistent high fever that I was convinced was an ear infection. It wasn’t. No idea what it was. He tested negative for flu and RSV, but the fever was too high for teeth (102) so I guess it was just a bad cold? Whatever it was, I’m so thankful it is GONE! 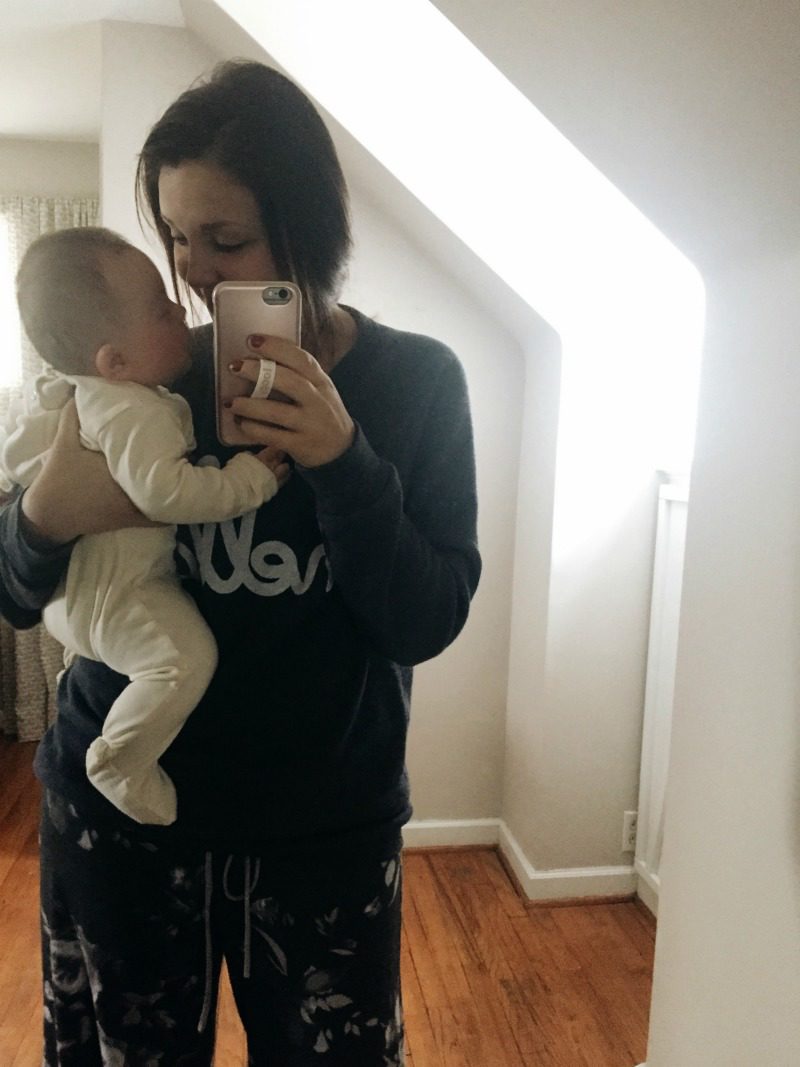 Personality: SO very happy! ALL the time! So many smiles. So laid back. So go with the flow. 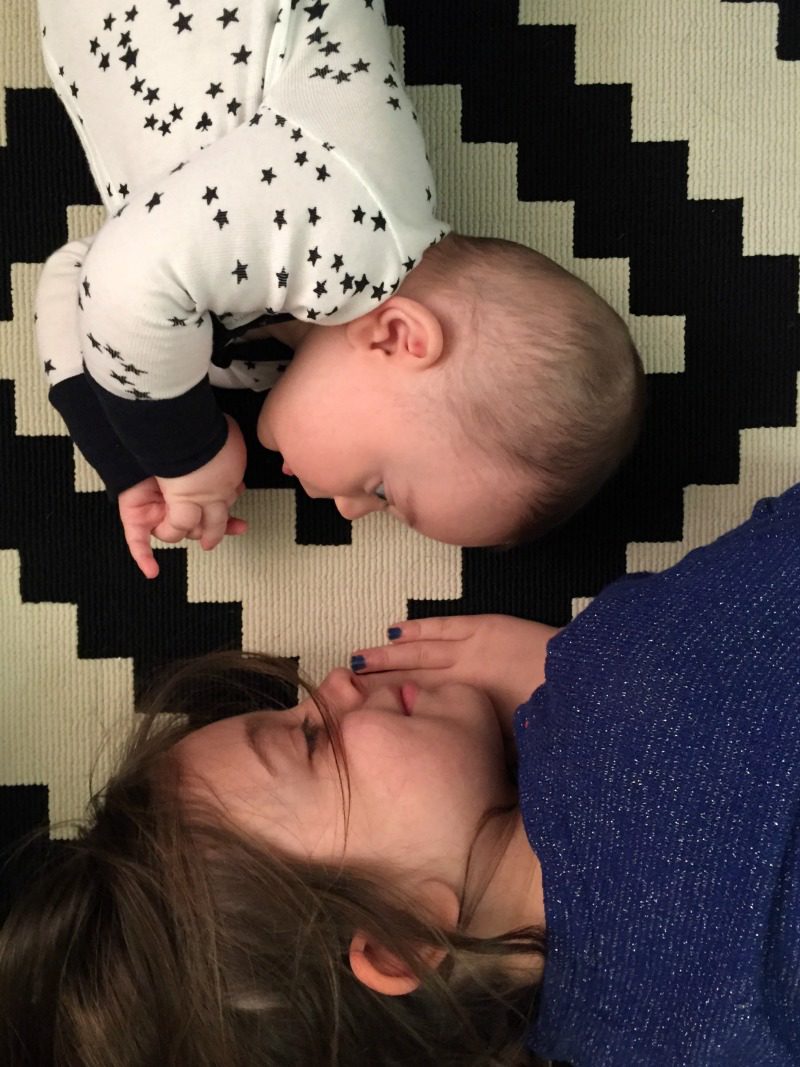 He made a face at me the other day that was 100% Jim and it was totally trippy.

But mostly yeah, when I look at him all I see is baby Abigail. 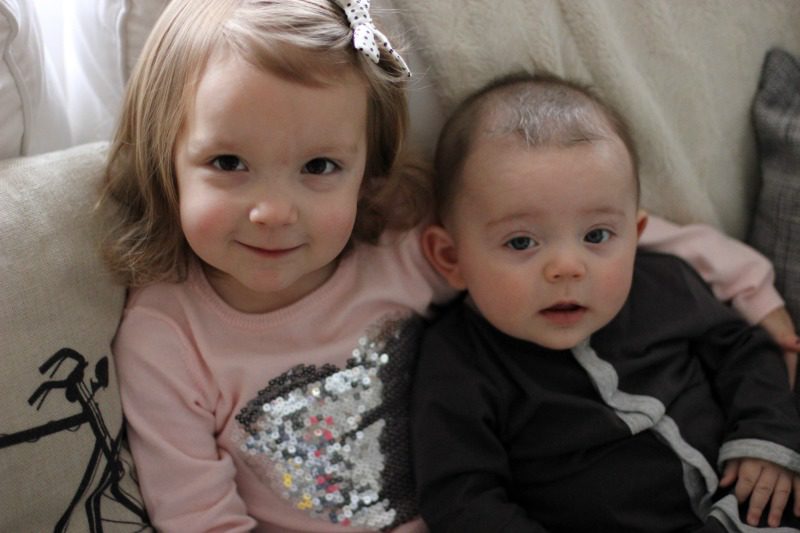 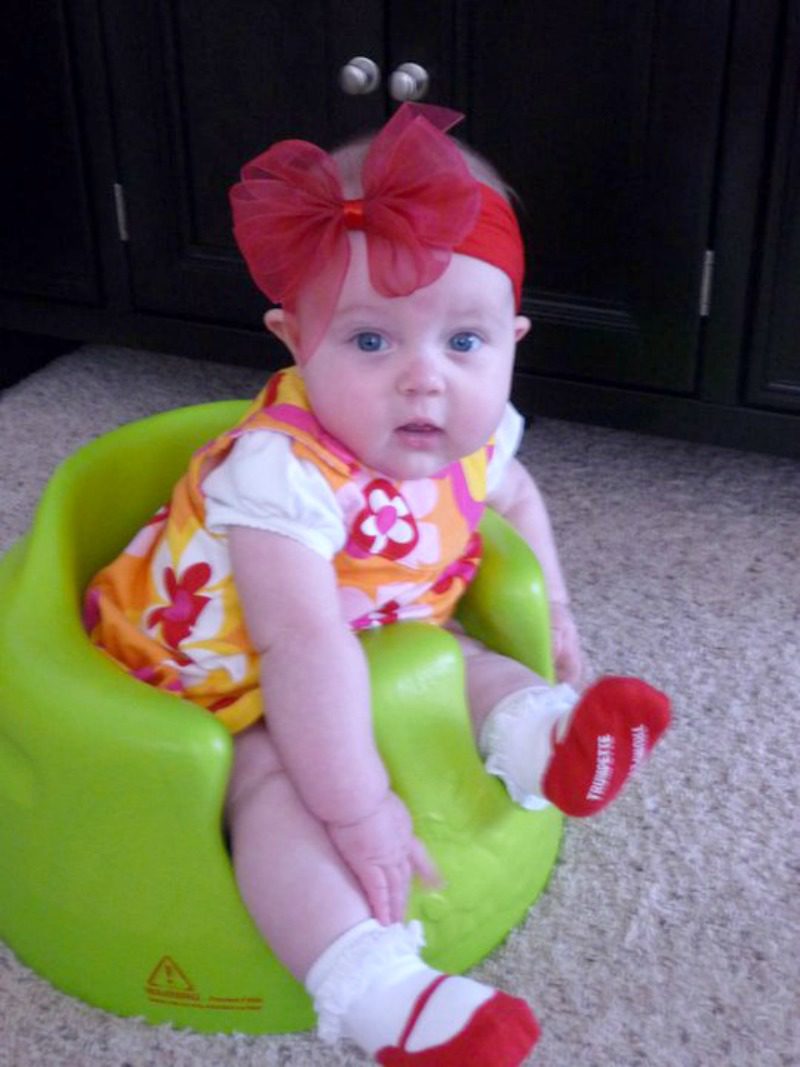 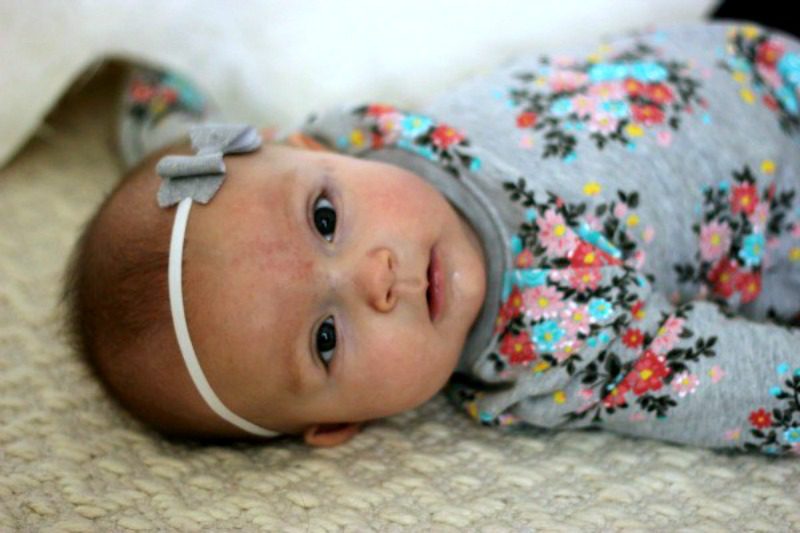 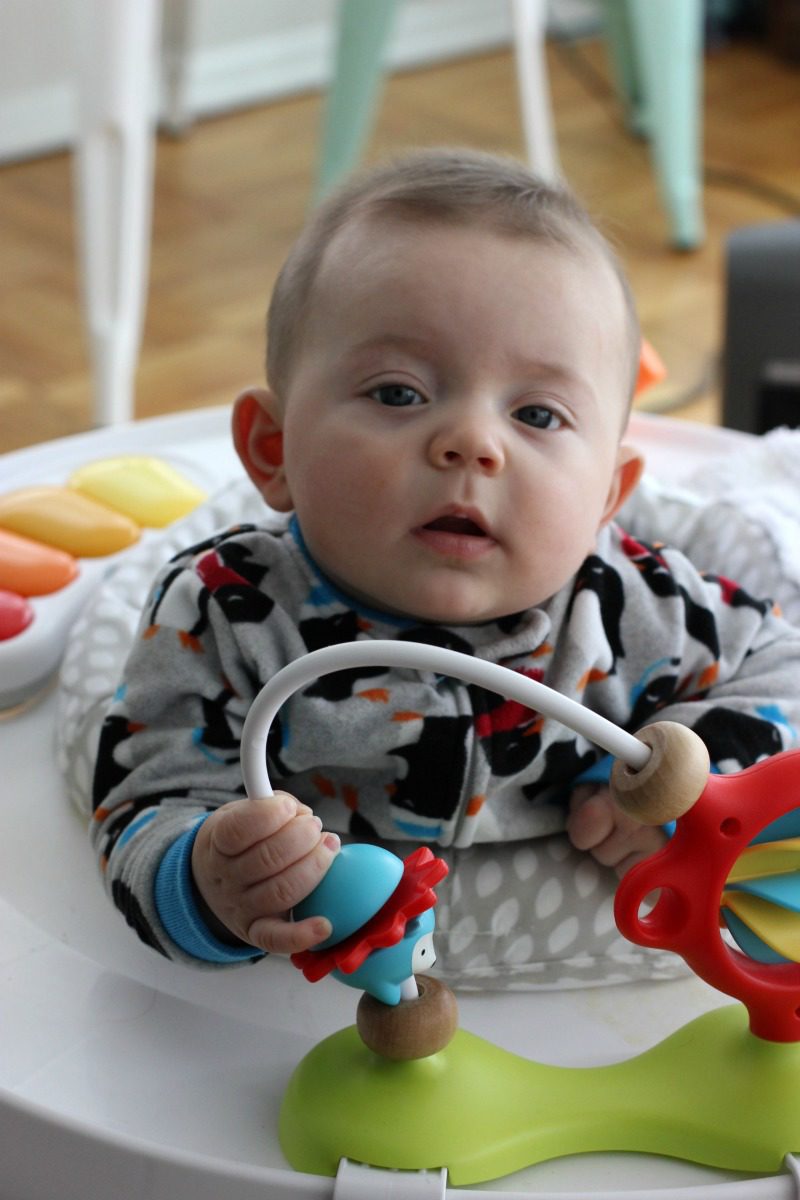 So thankful for this little boy and that he is a part of our family. We love him so much! 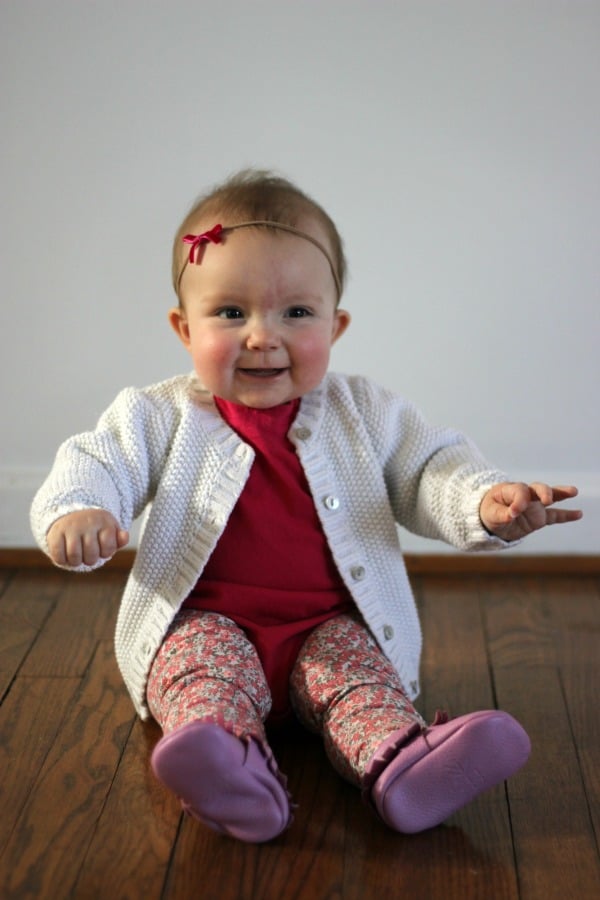 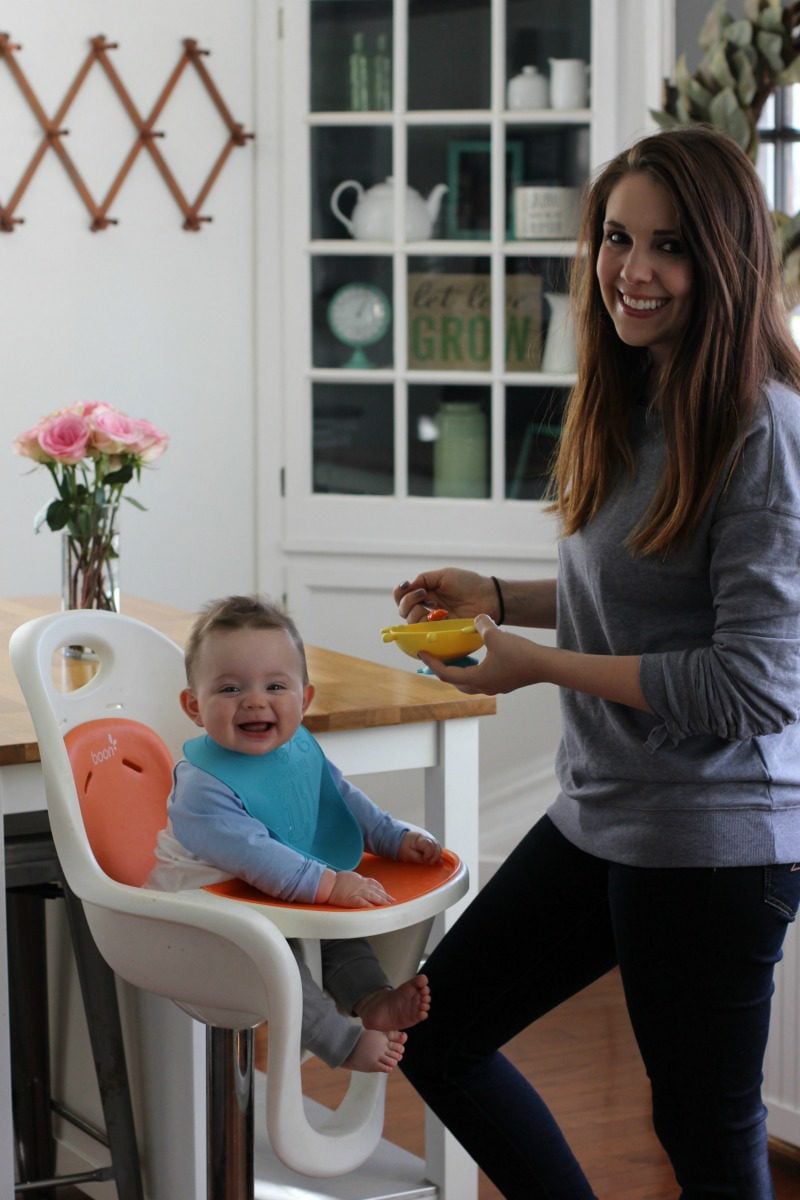 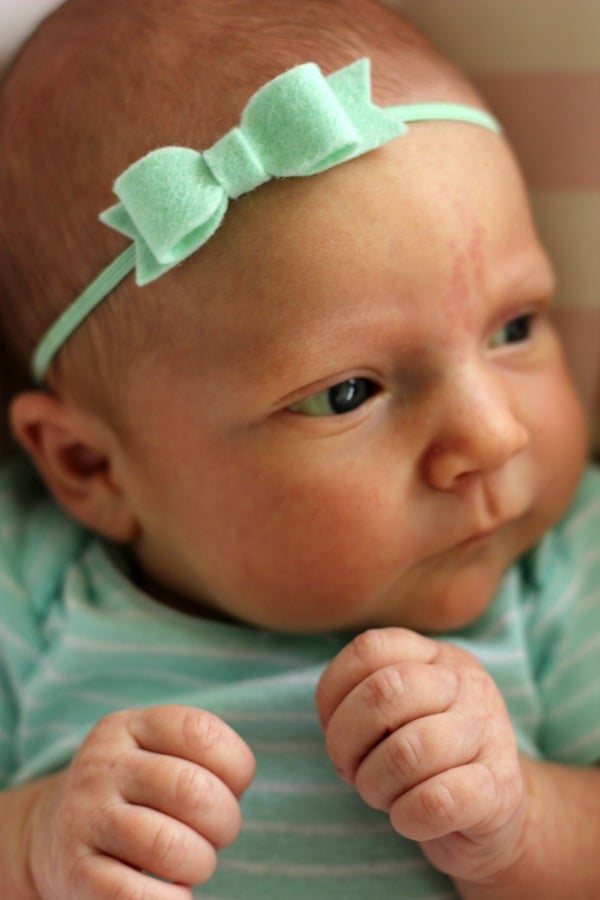 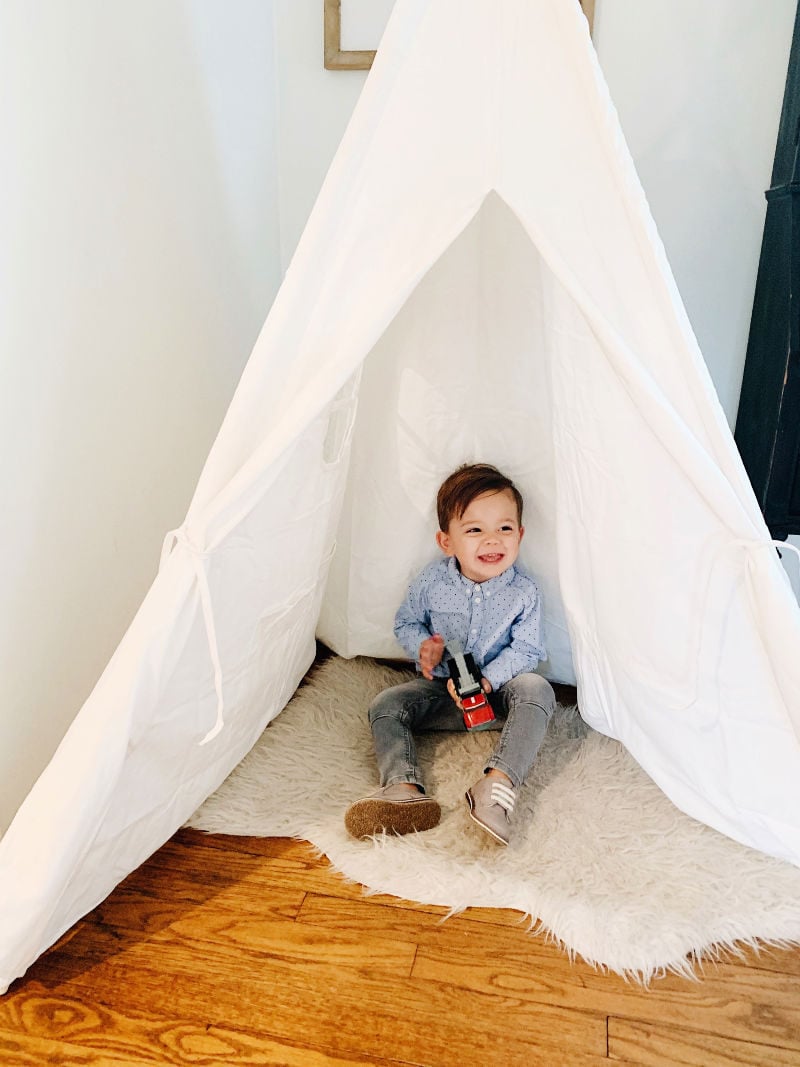 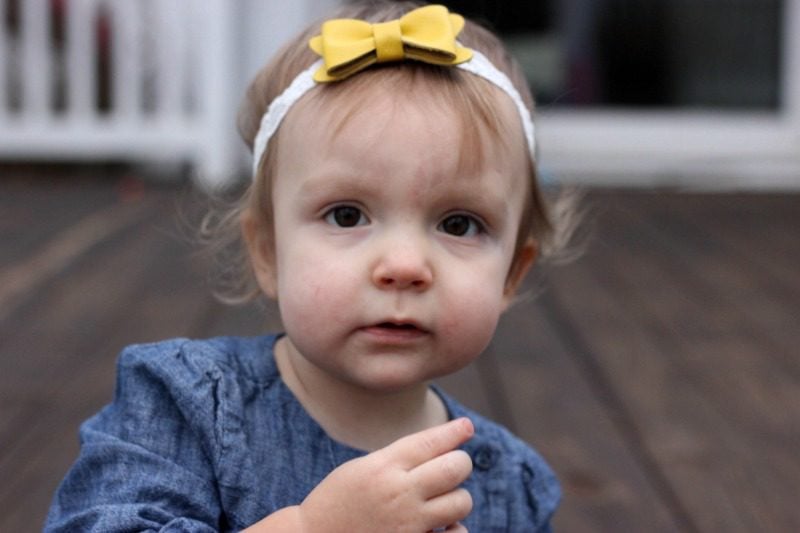